The 2019 Petersville Regatta was again held from 27 to 30 December, and is timed to follow immediately on from BYS hosting the finish of the Cock-of-the-Bay race on Boxing Day.

It was a very popular event in the 1980s and 1990s when it was ultimately combined with Geelong Week (now Festival of Sails). The race was reborn in 2015 following the opening of the new section of the harbour and the format was changed to be an event located solely at BYS.

The event is now running to a proven format and we saw a total of 48 boats enter this year. The popularity of the Cruising division was again evident with three divisions of 10 boats per division. The Racing division was slightly down on numbers on previous years but, encouragingly, the Non-Spinnaker Cruising division grew, with seven entrants. This year also saw the introduction of the Sports Boat division with four entrants.

The Non-Spinnaker and Sports Boat divisions are strategic priorities for the club for quite diverse reasons. In the case of the Non-Spinnaker division, this is an ideal way for keelboats that are new to the club and/or new to sailing to enter a competitive regatta without the demands of flying spinnakers. Less stressful starts and shorter courses make for an easy entry into regatta sailing.

Sports Boats on the other hand are the ideal youth transition division. This year’s Sports Boat division saw some really close results and we will be concentrating our efforts to achieve some growth in entrants in future years.

A huge thanks to our GM Amanda Jacobs and her events team who worked with the club sponsors to come up with the 200 individual daily prizes that were handed out over the four days. An equally huge thanks to Trish Langton who again acted as prize coordinator and made sure that the daily prize-giving was efficient and smoothly executed. 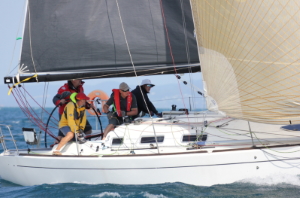 The two race courses were handled by our visiting PRO (Principal Race Officer) Glenys Hitchen (Cruising divisions) and our very own Phil Beattie who was the RO for the Racing and Sports Boat divisions. They were supported by a list of around 20 BYS on-water volunteers who again gave up their time to showcase how well a regatta is run at BYS – and they certainly delivered again this year.

Thanks to Felicia Brown who took on the role as on-shore regatta manager on short notice and to Chris Wilson who again acted as the Protest Chair. Thankfully there weren’t too many issues these ever-reliable BYS volunteers had to handle.

On the sailing admin and logistics side, we had Sarah Ogilvie (Head of Sailing) and her team making sure that the registration process, sign-on sheets, setup of the start boats and patrol boats as well as the preparation of the results were executed like a well-oiled machine. A big thank you to Sarah, Gordon and the rest of the team. I also want to make a special mention of Anna Lewis who looked after the radio for the regatta with assistance from Jane Grimshaw. And a big shout-out to one of our juniors, Grace Lewis, who worked tirelessly every day of the regatta behind the scenes making sure the results were entered into TopYacht and every boat was checked off and got their correct result for each race. An exceptional effort Grace!

The BYS staff were understandably under the pump leading up to Christmas and I’d like to make particular mention of Dave, Rob and the F&B Team. It wasn’t easy and at times they were stretched; however, to the outside observer it was a very well-run and smooth event and we received some very positive feedback.

Thanks to all who participated, but above all, thanks to the staff and volunteers who put on a great event.